THE FAMILY COAT OF ARMS: 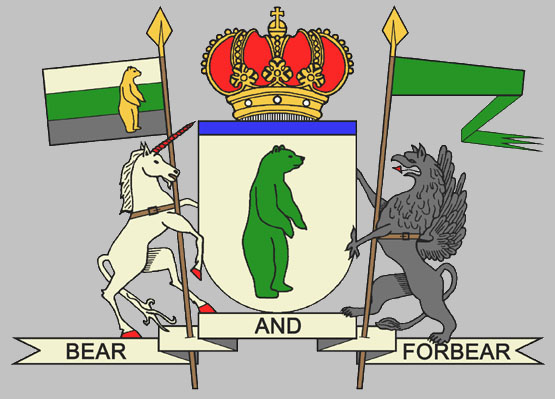 The actual coat of arms consists of a standing green bear, facing left (as seen by the person holding the shield), on a white escutcheon (shield). In Europe, the bear had the role which in the Middle East is reserved for the lion and for the tiger in India: that of a mammal more powerful than men and therefore almost divine. The name 'Barnard' (bear heart = heart of a bear) signifies a 'man as brave as a bear' or even 'killer of bears' and certainly a man competing with the gods.

Above the bear is a narrow blue bar carrying a golden crown with three leaves of clover (symbolizing good fortune) and three pearls (symbolizing wealth). On the right the escutcheon is supported by a white unicorn, with red hooves and horn. This symbolizes 'the good' which is helping the bear in its battle against 'the evil', symbolized by the black griffin, with red claws, supporting the escutcheon on the left. The red is the blood which is shed in this battle, the green of the bear symbolizes its innocence and the blue bar represents the higher powers which seem to play a rather passive role.

The griffin carries a spear to which a green, folded banner is attached. The green of this banner matches that of the bear in the escutcheon. The unicorn also carries a spear. To this a flag is attached divided into three horizontal bars of the same width. From top to bottom these bars are white, green and black. Close to the pole there is the same bear as in the escutcheon but here its colour is gold.

All this is resting on a white, symmetrically folded banner with the device 'Bear and forbear', a pun towards the bear which plays such a central part in the coat of arms. The suggestion that this device is a corruption of 'Beer and four beer' must therefore be labelled slander.

One of the few other families which has a bear in its coat of arms, like the Barnard family, are the counts of Warwick in Great Britain. However, this bear is both chained and muzzled. The bear in the escutcheon of a Barnard family in the United States wears only a collar but seems, according to the motto, still to be dangerous.

Even though bears occur in Europe, unlike lions, the latter are much more common in heraldic representations. Still, bears are featuring in the coats of arms of the capital cities of Berlin (Germany), Bern (Switzerland) and Madrid (Spain) as well as in the coat of arms of Greenland. For obvious reasons the latter does not show a brown bear but a polar bear, sitting in a blue escutcheon.
To the next page
Back to the Barnard WWW home-page