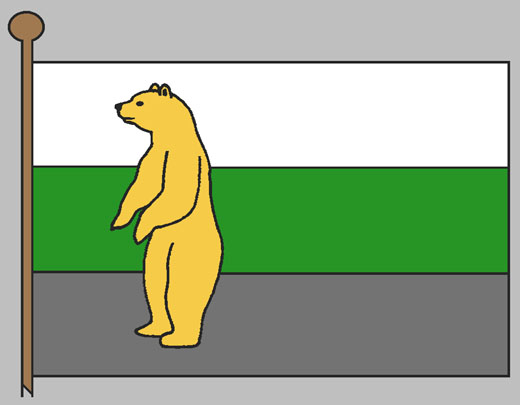 The basis of the flag are three bars of the same width. From top to bottom their colours are white, green and black. These match the most important colours in the coat of arms.  Close to the pole to which the flag is attached, about one third along the width of the flag, we find the bear from the escutcheon. Here the colour of the bear is gold, like the sun which brings light and life. At the same time the bear seems to be fighting the pole as a symbol of its struggle for freedom and independence.

The main elements of the coat of arms not only reappear in the flag but also in the seal and the tartan of the Barnard family:

Even though bears occur in Europe, unlike lions, the latter are much more common in vexillological representations. Still, bears are featuring in the flags of the Swiss cantons Appenzell (Inner-Rhoden and Ausser-Rhoden) as well as in the flag of the American state of California.

To the next page
Back to the Barnard WWW home-page