Bears are mammals belonging to the large group of carnivores (meat eaters). Within this group, there are two families of bears: Ursidae (large bears) en Procyonidae (small bears). The family of large bears include the 'fathers of the family' Ursus arctos (brown bear), U. americanus en U. maritimus as well as Helarctos malayanus, Melursus ursinus, Selenarctos thibethanus and Temarctos ornatus. The 'fathers of the family' of small bears are Procyon lotor (racoon) and P. cancrivorus, but also Bassaricyon alleni, B. gabii, Bassariscus astutus, B. sumichrasti, Nasua nasua, N. narica, N. olivacea, and Potos flavus are small bears.

The above mentioned bears are predators which supplement their diet with eggs, roots and berries. They are plantigrades with large, non-retractable claws and a short tail. Closely related to the bears are the small panda (Ailurus fulgens) and the famous large panda (Ailuropoda melanoleuca). With their strictly vegetarian diet they are sometimes regarded a separate family, but they are usually classified as small bears and large bears respectively. Koala bears are no bears at all but marsupials. They only occur in Australia and feed on certain species of eucalyptus leaves. Their name is from a maori word meaning 'does not urinate' which they indeed seldom do. Remarkable is further that their front paws have two thumbs.

The translation into English of the official, Latin name of the constellation commonly known as 'big dipper', the most obvious constellation in the northern sky, is 'big bear' ('ursus maior', sometimes also referred to as 'septem triones'). Nearby, a very similar constellation can be found which is officially named 'ursus minor' ('little bear') but is usually called 'little dipper'. 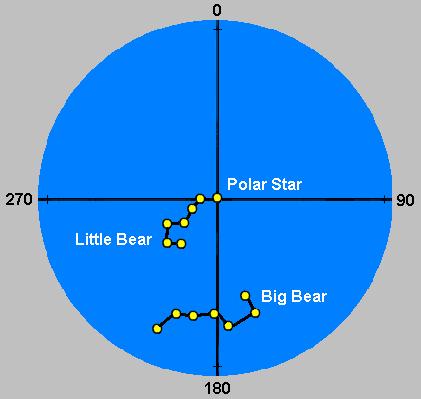 The stars of ursus maior still carry the names given to them by medieval, Arab astronomers. From left to right these names are: Alkaid, Mizar, Alioth, Megrez, Phecda, Merak and Dubhe. The virtual line between the last two stars mentioned, known to modern science as alpha- en beta-Ursus Majoris, points towards the best known star in the sky: the polar star (Alroekaba, polaris) also known as: alpha-Ursus Minoris.

Even though bears occur in Europe, unlike lions, the latter are much more common in heraldic and vexillological representations. Still, bears are not completely ignored and one can be seen in the coat of arms of Madrid, next to a dragon, a fruit tree and a garland of oak leaves. A bear is taking a more central position in the coats of arms of Berlin and Bern, in the flag of both Appenzell and California and of course in the coat of arms of the counts of Warwick as well as that of the Barnard family. The coat of arms of Greenland also carries a bear. However, for obvious reasons this is not a brown bear but a polar bear, sitting in a blue escutcheon. 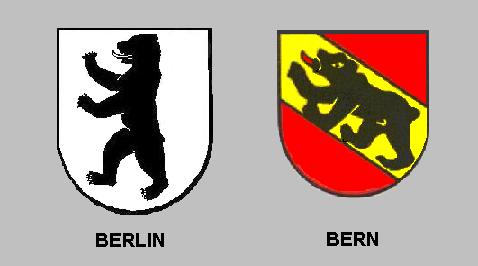 Bears are the favourite animals of the authors of children's books and toy makers. The first teddy bear was probably made as early as 1902 by the German manufacturer Richard Steiff. Since that day millions of toy bears, named after the American president Theodore Roosevelt (Teddy's bear), were made, sold and collected. The most famous bears in literature are Paddington (created by M. Bond) and Winnie the Pooh (by A.A. Milne).
To the next page
Back to the Barnard WWW home-page