-     That Edward Emerson Barnard also discovered a moon around Jupiter, which he called 'Almathea', in 1892?

-     That also a comet and a nebula have been named after E.E. Barnard?

Barnard's comet was seen in 1889, by the American astronomer E.E. Barnard, and will pass Earth again in 2017. The Horsehead Nebula, in the constellation Orion, is also referred to as 'Barnard 33' in honour of the fact that it was first described and catalogued by E.E. Barnard in 1913 and 1919.


-     A crater on the moon is named after Edward Emerson Barnard?

To the end of this page

-     That, from the 15th century onwards, Barnard's Inn is part of Gray's Inn, one of the four Inns of the Chancery where English students of law are trained?

In or shortly before 1451 Lionel Barnard rented a building from the chairman of Lincoln's Inn in order to house Barnard's Inn. The four Inns of the Chancery are a kind of boarding schools where English students of law are trained in classes and dummy trials. Even though these important functions are now performed by universities, all English lawyers, bannisters and judges are still member of one of the four Inns of the Chancery: Inner Temple, Middle Temple, Lincoln's Inn or Gray's Inn which consists of Staple Inn and Barnard's Inn.

-     That Sir John Barnard is named as the true author of Shakespeare's plays?


-     That another John Barnard was responsible for the music played in St. Paul's Cathedral, in London, during the reign of Charles I?

Before accepting this position, John Barnard was a member of the choir in Canterbury Cathedral. He collected music by Byrd, Tallis and others in 'Selected Church Music', which was printed in 1641. A set of his music manuscripts are now kept in the Royal College of Music, in London. John Barnard was married twice, all his children seem to have died in infancy (information courtesy of Daniel Bamford).

John Barnard (1685-1766) was a rich merchant who became a member of Parliament in 1722. There he managed to stop a law which could have seriously damaged the trade in wine. In 1745 he was made Lord Mayor of London, a task he fulfilled so successfully that he was called the 'father of the City'. A statue of him can be seen in the Royal Exchange in London.

Charlotte Alington Barnard (1830-1869) lived with her husband Charles Barnard in Westgate en Pimlico (United Kingdom).
Her best known compositions are 'I cannot sing the Old Songs' and 'Come Back to Erin'.


-     That yet another John Barnard was made governor of the American military academy at Westpoint in 1855?

John Barnard (1815-1882) was a military engineer involved in both the battle of Tampico, during the war between the United States and Mexico, and the battle of Washington, during the American civil war.
In 1855 he published the book 'Phenomena of the Gyroscope', which was published again in 1872 with the title 'Problems of Rotary Motion'. In 1859 the book 'Dangers and Defences of New York' appeared, in 1862 both 'Notes on Seacoast Defence' and 'The Battle of Bull Run' and in 1863 'Artillery Operations of the Army of the Potomac'.

-     That there are at least ten cities or villages in America called Barnard?

-     That a town in Great Britain (County Durham) is named Barnard Castle?

-     That a town in the United States (Maine) is named Barnard Corner?

-     That a town in the United States (North Carolina) is named Barnardsville?

-     That both Andrew Francis Barnard and his nephew Henry William Barnard were generals in the British army?

-     That Edward Barnard was a British admiral?

Edward Barnard (1781-1863) was made admiral in 1851. He was involved in the Battle at Trafalgar and commanded, among others, the Conway, the Hercules and the Cambridge.

-     Barnardia (Lindl.) is a species of plants within the group of hyacinths?

This species, of the large family of Liliacea (lelies), occurs mostly in the wild. Only B. japonica is sometimes cultivated.

-     That a medium sized parakeet of the family Psittacidae, native to eastern Australia, is called Barnard's parakeet (Barnardius barnardi)?

-     That Lasiorhinus krefftii (the hairy-nosed wombat, a south Australian marsupial of the family Vombatidae) used to be known as Lasiorhinus barnardi?

The name change became necessary when it was determined that the two species of the hairy-nosed wombat, L. barnardi and L. gillespiei, were in fact one species. Both 'species' are protected since the beginning of the 1970's.

-     That a small archipelago off the coast of Australia (Queensland) is named North Barnard Islands?

-     That a river in Australia (New South Wales) is named Barnard?

-     That a peninsula in Canada (North-West Territories) is named Barnard Point?

In 1793 Lady Ann Lindsay, daughter of Sir James Lindsay (the 5th count of Balcarres), married Andrew Barnard, regent of the Cape of Good Hope (South Africa). Andrew returned to Great Britain in March 1794 but Lady Ann remained in South Africa until January 1802. She described her stay in that country in her book 'South Africa a century ago', but she became known with her ballad 'Auld Robin Gray' (1772). The music for this ballad was written by the Reverend William Leeves and it later inspired Alfred Lord Tennison to write his poem 'Enoch Garden'. Lady Ann Barnard lived from 1750 till 1825.

-     That Barnard College was founded in 1889, by the University of Columbia (New York), to honour Frederick Augustus Porter Barnard who was the president of that university between 1864 and 1889?

-     That Henry Barnard was the first American state commissioner for education?

-     That George N. Barnard was one of the photographers which documented the American civil war?

Like the rest of Matthew Brady's studio the American photographer G.N. Barnard (1819-1902) was employed by the Northern army. His assignment was to photograph bridges, roads and buildings. In his own time he also took pictures of the devastating results of the war. His technique is characterized by the cloud formations which he added to his pictures and by which he obtained a dramatic effect.
In 1866 he published his work in 'Photographic Views of Sherman's Campaign', a book which was reprinted in 1977.

-     That George Gray Barnard made a few famous sculptures?

The American sculptor G.G. Barnard (1863-1938) studied in Paris. His most important  works are considered to be the sepulchre of the Norwegian poet Severin Skovgaard, the monumental entrance of the Capitol of Pennsylvania, in Harrisburg, and the controversial statue of Lincoln in Lytle Park, Cincinnati, Ohio.

De British physicist J.E. Barnard (1870-1949) was connected to the National Institute for Medical Research in London as microscopist. With W.E. Gye he performed research into carcinogenic micro-organisms and he later published the handbook 'Practical Photo-micrography', co-authored by F. Welch.

-     That the author Louisa May Aliott sometimes used the pseudonym A.M. Barnard?

The American author L.M. Alliot (1832-1888) became famous with the novels 'Hospital Sketches', 'Jo's Boys' and especially 'Little Women', published in her own name, but also wrote stories and thrillers which she published under the pen-name A.M. Barnard.

-    That in 1885 Alfred Barnard, with a group of friends, visited all the whisky distilleries in Great Britain, making him the first recorded visitor to the Laphroaig distillery?

Alfred Barnard's 'The Whisky Distilleries of the United Kingdom', an account of his trip, became a classic and the first of a genre.


-     That Marjorie Barnard wrote her novels together with Flora Eldershaw?

-     That Kate Barnard was the first woman in the United States of Amerika to have a elected position for one of the states?

Kate Barnard (1875-1930) was elected State Commissioner for Charities and Corrections for the state of Oklahoma in 1907 and had that office until 1914.

C.I. Barnard (1886-1961) had several high positions with the American telecommunication firm AT&T. After his retirement he was elected president of both the Rockefeller Foundation and the National Science Foundation. In 1938 he published 'Functions of the Executive', a sociological study of leadership within a business community.

-     That the first transplantation of a human heart was performed by Christiaan Neethling Barnard?

In December 1967 a team of 20 surgeons of the Groote Schuurhospitaal in South Africa, supervised by C.N. Barnard, transplanted the heart of the 25-year old Denise Duvall, who died in a traffic accident, to the 55-year old Louis Washkansky, who was suffering from an incurable heart disorder. Washkansky died 18 days after the operation, the second patient who received another heart survived more than a year.

-     That another Christiaan Barnard from South Africa is a celebrated playwright?

-     That Robert Barnard has written a number of highly appreciated detective stories?

Among others: 'Corpse in a gilded cage', 'No place of safety', and 'A scandal in Belgravia'.


-     That Henk Barnard received the Netherlands State prize for books for young people in 1979?

-     That the Netherlands poet known as Guillaume van der Graft is in reality called Willem Barnard?

Willem Barnard (born 1920) published, among others 'In exilo' (1946), 'Tussen twee stoelen' (1960) and 'Na veertig' (1973). In his poems he makes a link between art and Christianity. His personal doubts and fears are recurrent subjects, especially in his later works. The style of his language is modern with an often surprising choice of words.
W. Barnard became widely known with his translation and modernization of the Christian liturgic psalms and hymns. In 1966 he received an honorary doctorate from the University of Utrecht.

-     That the author Benno Barnard, the most famous Dutchman in Belgium, is his son?

Benno Barnard (born 1954 in Amsterdam) published, among others 'De Engel van Rosetti' (1981), 'De toon van Klein Rosendaal' (1983) and 'Uitgesteld paradijs' (1987). He lives in Belgium and publishes columns and short stories about his live there.


-     That the 'Barnard' (Bn) has been suggested as unit for the emotional discomfort that occurs in sexually loaded situations?


The suggestion is said to be made by Dr Victoria Barnard, at the John Radcliffe Hospital in Oxford (UK), but firm evidence for this seems lacking. 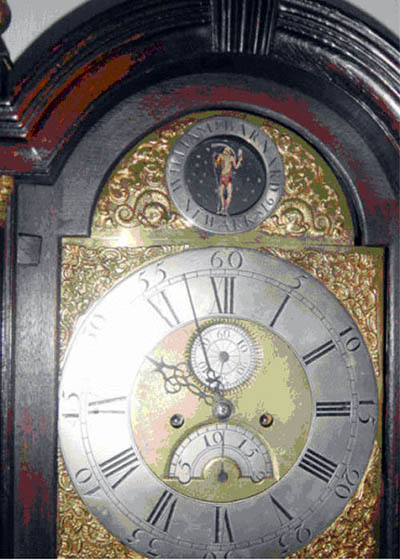 Face of clock 817 made by William Barnard (1704-1783)
in Newark (United Kingdom), currently owned by
Arie en Arjan Barnard in Hardenberg (the Netherlands).

To the next page
Back to the Barnard WWW home-page